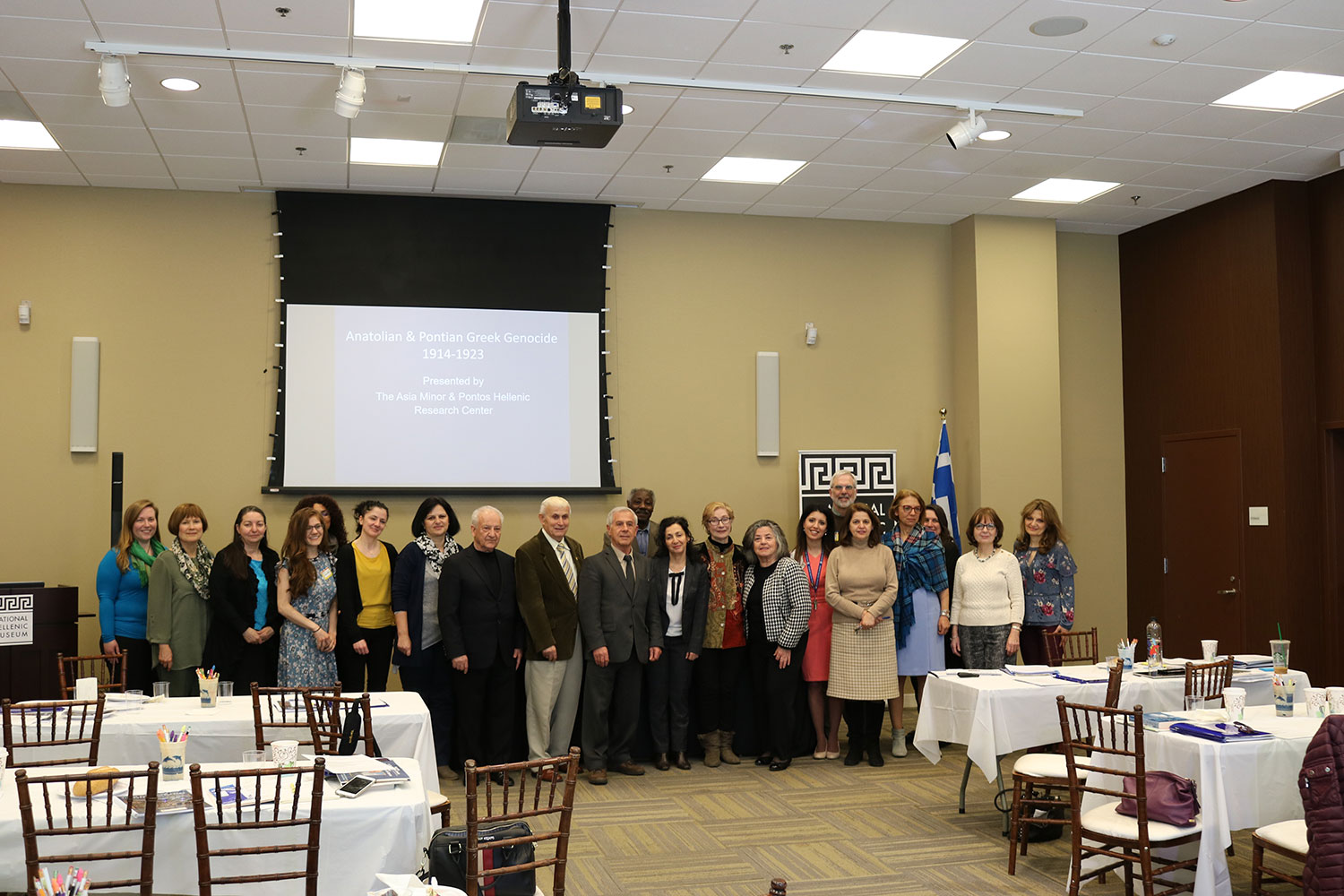 Posted at 06:36h in Education by wp_admin 0 Comments
0 Likes

Educators Workshop on the Genocide of the Greeks of Asia Minor: 1913-1923

Educators Workshop on the Genocide of the Greeks of Asia Minor: 1913-1923 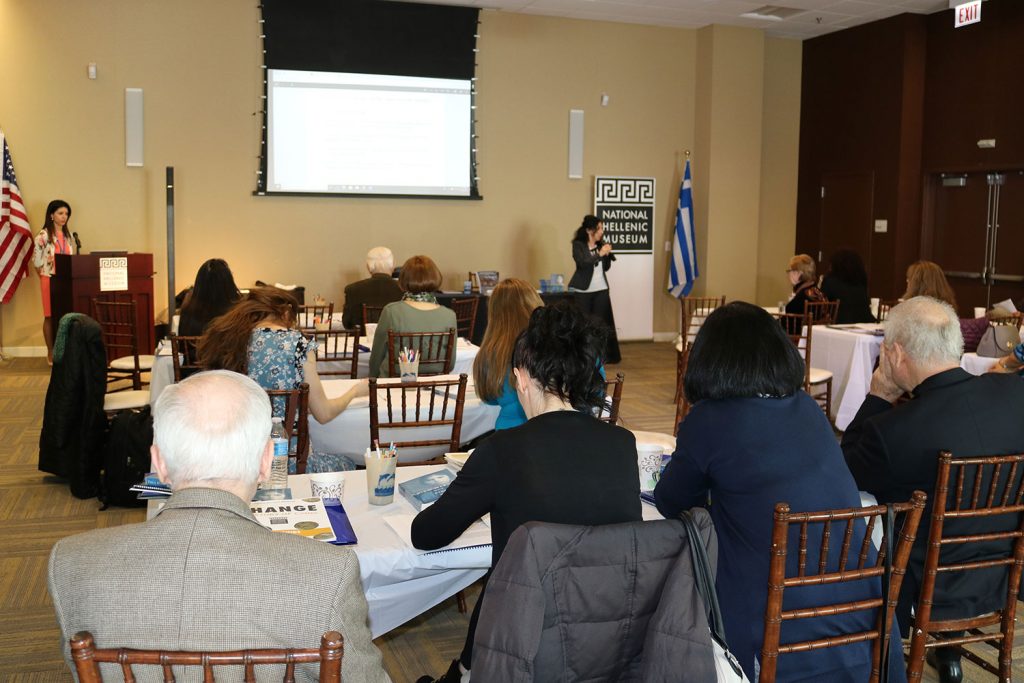 The National Hellenic and the Asia Minor and Pontos Hellenic Research Center (AMPHRC) organized an all-day workshop for educators on Friday, April 20th, 2018 at the Hellenic Museum in Chicago, in order to provide information, educational material and resources that will help educators to return to the classroom with a deeper knowledge of the history and genocide of the Greeks of Asia Minor (i.e, Greeks that used to live in the Black sea (Pontos), Asia Minor / Anatolia, and Eastern Thrace).

The workshop started with the welcoming remarks by the Museum’s Education Program Director Dimitra Georgousis, and by George Mavropoulos, Founder of the AMPHRC, who thanked the National Hellenic Museum for hosting the event and the John Kulis Foundation for the generous donation to support the workshop. In his welcoming remarks George Mavropoulos stated .. while many educators teach their students about the language and history of Greece, few Greek educators today convey to their students the history of the remarkable Hellenic presence in Asia Minor, and the magnificent contributions the Asia Minor and Anatolian Greeks made to the world; nor do they narrate the story of the horrible ending to the Greek presence in Asia Minor, through a decade of genocide (1913- 1923) that claimed as much as one million lives.

The program started by the main presenter Ron Levitsky, a retired middle school social studies teacher with many awards for excellence in teaching. Ron Levitsky, through power point slides ,described the life and contribution of well known, great Asia Minor Greek thinkers of antiquity such as Homer, Thales, Strabo and Diogenes and others who were born in Asia Minor and who were crucial to the development of Western poetry, prose, history, medicine, philosophy, and science.

Professor Anastasia Giannakidou (Linguistics, University of Chicago) and member of the Executive Board of AMPHRC, continued with a presentation on the Greek presence in the East during later antiquity and Byzantium. She described the contributions of Alexander the Great in spreading Hellenic culture as far as central Asia, as well as intellectual achievements of Greek thinkers during the Hellenistic and Roman period. Prof. Giannakidou emphasized that Greek culture, at that period in time, is embraced even by non-Greeks (e.g. Romans, as well as Jewish thinkers) as an ecumenical high culture.  The Easter Roman Empire (or, Byzantine, as it is known despite the fact that the Eastern Romans never used this name), Prof. Giannakidou argued, was the cultural and political heir of the Greco-Roman tradition, and the Greek identity at that time identifies fully with it, as can be seen in the use of words such as Ρωμιός, Ρωμιοσύνη, which are the labels Greeks of that time use to identify themselves, and which remain in active use until today.

The Greek world suffers an irreparable trauma when Constantinople is conquered by the hordes of Mohamed the Conqueror on May 29, 1453. The Greeks, along with the other subjugate nations of the Ottoman empire in the Balkans and Easter Europe, remain under under tight control, oppression and apartheid during the four hundred years of Ottoman yoke until the War of Independence (1821-1830)— which leads to the creation of the modern nation-state of Greece. Many Greeks, however, remain Ottoman subjugates, and at the beginning of the 20thcentury, we witness the bloody exodus of the last remaining Greeks of Asia Minor and Anatolia, another traumatic experience known among the Greeks as the Μικρασιατική Καταστροφή (the Asia Minor catastrophe). The Greeks of the East that survived the genocide, now come to Greece as refugees and settle in various areas. Their story stays untold for many years. 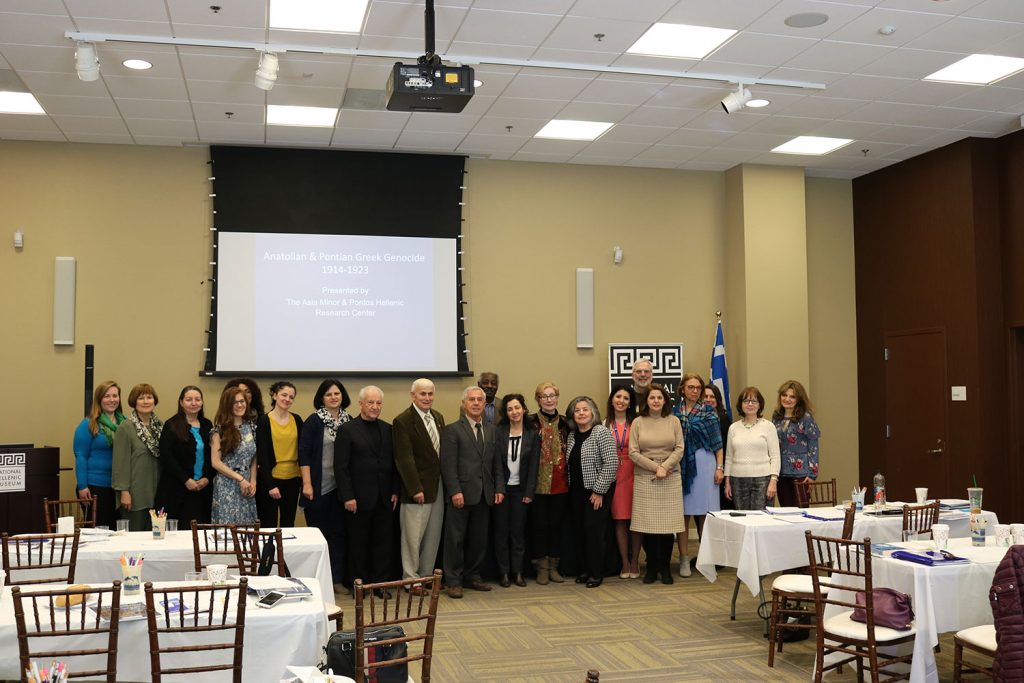 Anastasia Skoupas – Spiridis, talked more about the genocide, and offered concrete examples  with material from the Teaching Guides created by the AMPHRC and other sources. She talked about the 8 stages of genocide, including several personal stories, and  concluded her presentation stating…the lesson plans created in the Teaching Guides  and the plans  which we shared with you today are valuable not only for the Greek Genocide, but also in the teaching about tolerance and acceptance of different cultures. Student will benefit from making personal connections to the various stories and activities included in today’s workshop.

Thea Halo, a special guest and author of the book Not Even My Name, shared her mother’s life and experience of the genocide which is the object of the book. Thea emphasized her and her mother’s visit to the village St. Antonios in Pontos, and read of excerpts from her book, speaking of the family’s tragic story which was similar to thousands of Pontian Greeks, Armenians and Assyrians. She also spoke of her experience at the 2007 International Association of Genocide Scholars (IAGS) and the resistance of some scholars to approve the Resolution for the Genocide of the Greeks and Assyrians. She remarked that many of those scholars no longer oppose recognition of the Greek genocide since considerable progress has been made in the publication of historical material since then, especially by the AMPHRC.

Speaking to the Hellenic Heart Beat radio and TV news media Ron Levitsky, stated that through analysis and evaluation of primary sources, including survivor narratives, interactive text and graphics, and diaries, participants were actively engaged in a direct connection with the reflections of those involved in the genocide, and brought a more personal dimension to this often forgotten history …participants teachers also gained a deeper knowledge of the genocide, learning why, how, what, when, and where the genocide of the Greeks of the Asia Minor took place, including key historical antecedents that led up to the atrocities, as well as the aftermath and denial that still takes place.  … 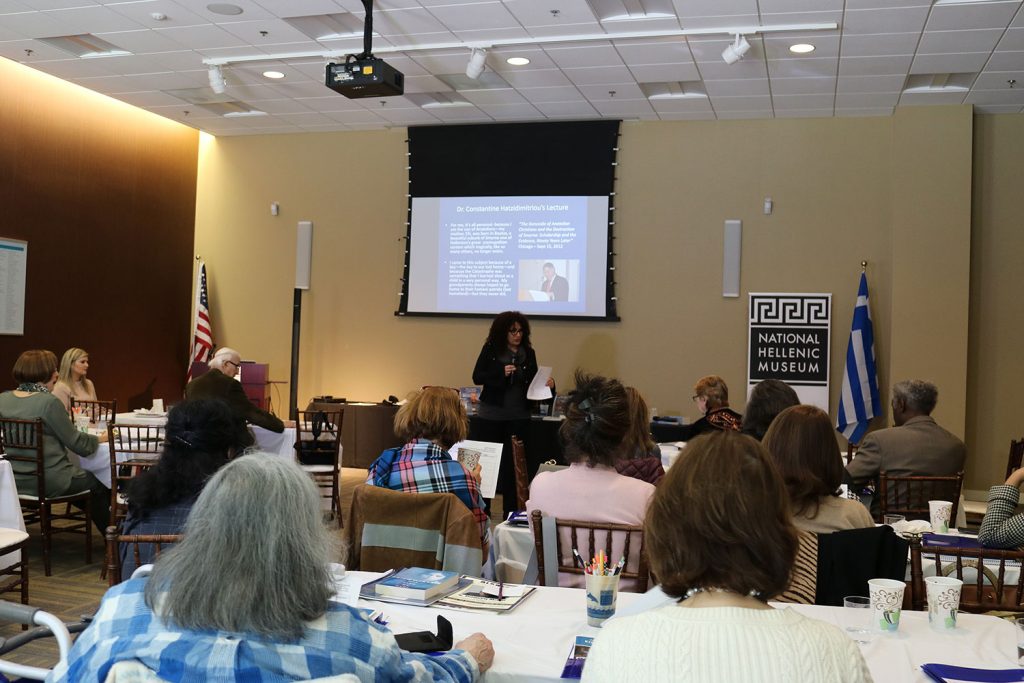 Dimitrios Georgakopoulos, Director of Athena schools, stated that it was a very productive and important day because with this workshop the historical memories awakened us as  teachersthe memories of the historical events that happened in our country and especially the genocide in Pontos. We lived these events today after the speeches and presentations of the presenters and I think it a good opportunity for all of us teachers to return to our schools so that the coming month of May which is the memorial month to honor of all those events, to repeat them and to transfer them to our students.  People who know their history they have continuity. People who forget their history unfoundedly they cease to exist with the passing of time.

Dimitras Georgousis stated that for me as an educator is really a pleasure to work with George Mavropoulos and the Research Center . They have inspired us and brought such a wealth of knowledge not only to us  here at the Museum but to Diaspora and to the educators in the Chicago land area. It is important to me as an educator for many reasons, but foremost because  the topic of the Greek genocide often goes untold and not being written in history books. But I am happy that there is progress. It is being written down, it is being told and the legacy and history is being preserved.

Voula Sellountos, director of the Hellenic Academy, finally said that I would like to congratulate all of you who organized such an  enlightening workshop that impressed and inspired us today. I promised as an educator and director of the Hellenic Academy, I will make sure the history and genocide of the Anatolian Greeks will topic will be included in the next school curriculum.