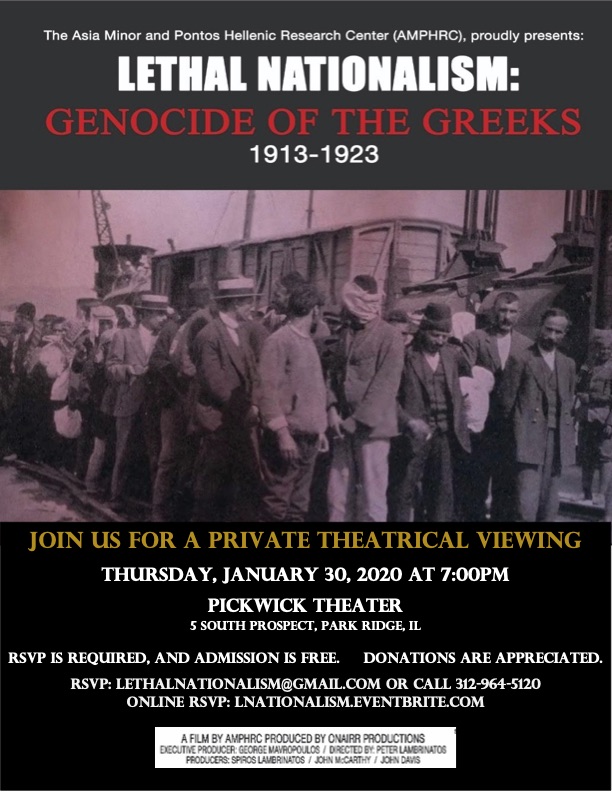 Posted at 08:15h in Documentary by wp_admin 0 Comments
0 Likes

AMPHRC Presents the Documentary Lethal Nationalism: Genocide of the Greeks 1913- 1923

CHICAGO, IL – The Asia Minor and Pontos Hellenic Research Center (AMPHRC) will hold a private theatrical screening of the powerful documentary Lethal Nationalism: Genocide of the Greeks 1913-1923 produced by OnAirr Productions at the Pickwick Theater in Park Ridge, IL on January 30, 2020.

Click here for registration, which is required for this free event.

AMPHRC’s eighty-minute documentary Lethal Nationalism:
Genocide of the Greeks 1913-1923 meticulously explores the
genocide of the Greeks of Asia Minor, Pontos, and Eastern Thrace between 1913 and 1923. Noted scholars and academics from around the world have recognized this genocide of the Christian populations of Greeks, Armenians and Assyrians as the first genocide of the 20th century. This documentary chronicles the systematic and brutal annihilation of Greek communities in Asia Minor, which had flourished for more than three thousand years but took only 10 years to destroy. First hand accounts from survivors explain in details the systematic destruction. More than 700,000 Greeks of Asia Minor and Pontos were killed and more than a million others were forced into exile while facing unimaginable horror at the hands of the Ottoman Turks.

This documentary gives sight and sound to one of the darkest episodes in human history; it gives voice to the victims and reminds us all to be vigilant and not to be silent.

AMPHR is a historical society and a 501 (c) (3) non-profit organization founded in January 2011. Our goal as a research center—unique in its kind—is to document and disseminate information about the Greek communities of the later Ottoman empire and study the expulsion of the Greeks from their ancestral homelands in Asia Minor (or Anatolia), Eastern Thrace, and Pontos.