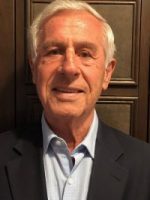 Mr. Mavropoulos was born in Kozani, Greece. His parents were born in the coastal city of Trabzon, by the Black Sea and what is now Turkey. His paternal grandfather was conscripted in the Turkish army, the so called labor battalions where he died at the age of 43. In 1923, Mr. Mavropoulos’s parents were forced to leave Turkey to seek refuge in Greece.

They fled to survive the massacres, deportations and genocide which started with the revolt of the Young Turks against the Ottoman Sultan, Hamid, in 1908 and ended in 1923 with the establishment of the Turkish Republic under the leadership of Kemal Ataturk.

During Mr. Mavropoulos’s childhood years in Greece, he experienced first-hand his parents’ difficulties and their nostalgia for their beloved lost homeland. He endured both poverty and dis­crimination as a refugee child and speaking a different dialect of the Greek language. Those struggles, coupled with the German occupation of Greece, Greece’s worn -torn civil war left childhood experi­ences that Mr. Mavropoulos will always remember. After surviving the concentration camps in Germany two years later his father was imprisoned for political beliefs, but a year and half later was freed not meeting the fate of hundreds of thousands of Greeks who were executed by the Greek government that followed the Truman doctrine.

In 1958, Mr. Mavropoulos immigrated to the United States from Greece as a foreign student and attended Roosevelt University. He graduated in 1964 with a bachelor’s degree in physics. In 1966, he earned a master’s degree in electrical engineering from the University of Missouri. After completing his formal education, he accepted an engineering position at Commonwealth Edison, where he continued to work until 1994. He retired from Commonwealth Edison/Exelon after 30 years in nuclear engineering. From 1995 until 2010 Mr. Mavropoulos worked at Sargent & Lundy, LLC as a Consulting Engineer, where he pro­vided comprehensive consulting, engineering, design, and analysis for nuclear power plants.

In addition to Mr. Mavropoulos’s professional accomplishments, he has dedi­cated his life to Hellenic civic service. He is the founder of The Asia Minor and Pontos Hellenic Research Center (AMPHRC), a non-for-profit organization. The mission of the Center is to encourage research promote education, and raise awareness of Greek civilization, in Asia Minor, Pontos, Pontos and Eastern Thrace, and their Diaspora as well as the Greek experience of genocide. Mr. Mavropoulos is also a member of the Pontian Greek Society of Chicago, where he served as Vice President in 2011 and President from 2007-2011. He was also a member of the Illinois Holocaust and Genocide Commission, which was established in 2011 by Governor Pat Quinn. After four years, he has been re-appointed by the new Governor of the state for another 2 years.

In recent years, through academic conferences, scientific meetings AMPHRC produced important publications which stand out for their quantity and quality. The effort for more research and publication is on-going activity.

From his early lifetime experiences, Mr. Mavropoulos developed a determination to stand against any ethnic, religious or racial injustice. He has committed his life to promoting awareness among all demographics to understand how and why genocide exists even today, and, most importantly, to help stop these atrocities from occurring in the future.

2011. Mavropoulos has received several awards from in US, Canada and Greece for his outstanding community leadership, especially establishing the Asia Minor and Pontos Hellenic Research Center on January 6th, 2011.