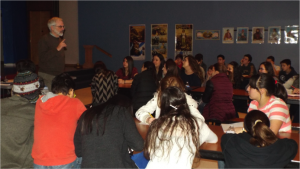 AMPHRC Presentation at the Hellenic American Academy in Deerfield, Illinois

On Saturday, March 28, the Asia Minor and Pontos Hellenic Research Center (AMPHRC) gave a presentation, at the Hellenic American Academy in Deerfield, Illinois, on the history of the Anatolian Greeks.  The presentation was in response to an invitation by the head of school, Mrs. Voula Sellountos.  Ron Levitsky, a retired history teacher, was the main presenter and was assisted by George Mavropoulos, founder of the AMPHRC.

Last year the AMPHRC published two teaching guides: Hellenism of Asia Minor and Pontos for elementary schools and The Genocide of the Ottoman Greeks, 1914-1923. Each guide was the basis of a presentation – one to elementary students and another to high school students.

Younger students (10-12 years old) were introduced to the history of migration from mainland Greece (9th and 8th centuries B. C) across the Aegean to coastal areas of Asia Minor, followed by further movement and settlement along coastal areas of the Black Sea (Pontos).   Mr. Levitsky discussed the flourishing Asia Minor and Pontos communities, which became major trading centers. Famous cities, established in Asia Minor and Pontos, were Sinopi (Σινώπη), Trebizond (Τραπεζούς), Miletus (Μίλητος), Ephesus (Έφεσσος), and Smyrna (Σμύρνη). These cities were also the birthplace of Western philosophy where the first great thinkers of antiquity – such as Thales, Anaximander, and Anaximenes (the so-called pre-socraticphilosophers) – lived and taught. These communities maintained a thriving Greek culture for millennia, until destroyed by genocide in the early 20thcentury. 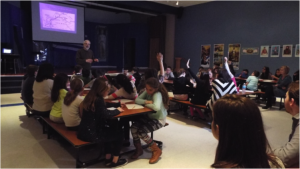 Showing great interest in the historical presentation, students discussed how this early Greek presence contributed to the development of science, mathematics, and philosophy. Students also considered how historical events of early migration and settlement were reflected in myths, such as Jason and the Argonauts.

After background information was presented regarding the development of Greek culture in Asia Minor and Pontos, the session for high school students focused on the genocide against Greeks that took place at the beginning of the 20th century. This genocide, from 1913-1923, was orchestrated by two consecutive Turkish governments – the Young Turk movement and the regime of Mustafa Kemal. Their goal was to eradicate the presence of Greeks in the region, as well as Armenians and Assyrians, in an attempt to transform the multi-ethnic Ottoman Empire into an ethnically ‘pure’ Turkish state.

With the rise of the nationalist Young Turk movement in 1908 and the events of World War I, by 1923, from approximately two million Greeks living in Asia Minor and Pontos, more than 700,000 perished, and over a 1.25 million were uprooted during the forced population exchange between Greece and Turkey.

Students and teachers discussed areas in the world that today are characterized by similar violence. The violence against Greeks, Armenians and Assyrians constituted the first large-scale genocide of the 20th century.  Modern day Turkey has yet to recognize this genocide.

During an interview after the presentation, Mr. Mavropoulos expressed his admiration of Mr. Levitsky’s knowledge of early Greek history and his ability to engage students and teachers in the two educational sessions.  The head of school, Mrs. Voula Sellountos, asked Mr. Levitsky to return for another presentation in the future.

For information on school presentations and activities
of the Asia Minor and Pontos Hellenic Research Center,
please refer to the website, www.hellenicresearchcenter.com,
or contact George Mavropoulos at gmavropoulos@hotmail.com.