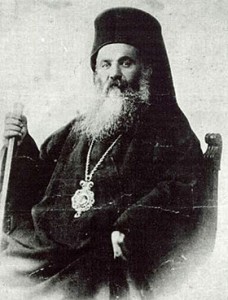 Archbishop Chrysostomos was an admired and revered figure among the Greeks of Smyrna. He strongly believed in the ideals of Hellenism until his tragic death in September 1922.

However Chrysostomos came into conflict with the Greek High Commissioner in Smyrna, Aristidis Sterghiadis. On one occasion Sterghiadis interrupted a church service attended by allied consuls and ordered Chrysostomos to stop the service immediately. Chrysostomos used his sermon to make a political comment rather than confine his message to one of a religious nature. Such interference would   have no doubt greatly displeased the Metropolitan.

Arnold Toynbee, the British historian and correspondent of the Manchester Guardian, described Sterghiadis as a “highly strung…but capricious and hot-tempered [individual who had] gained some unpopularity among the Smyrna Greeks.” He showed partiality towards the Turks and sometimes treated the Greek Smyriontes very harshly. Chrysostomos’ relations with Sterghiadis were very strained.

On May 1, 1922 Sir Harry Lamb, the British Consul General in Smyrna wrote a letter to the British High Commissioner in Constantinople, Sir Horace Rumbold discussing the Mikrasiatic Defence League. He stated that one of “the extreme advocates of Mikrasiatic autonomy, of whom the Archbishop Chrysostomos is one of the foremost spokesmen.” The idea of a separatist Greek state in Anatolia, instigated by Venizelists military officers, had its origins with the return of King Constantine to the Greek throne in December 1920. This unofficial movement, also known as the Committee of National Defence (Amyna), revealed the sharp divisions existing in Greek society between the Venizelists and Royalists.

In Michael Llewellyn Smith’s book titled The Ionian Vision (1973), the author quotes an important letter written by Chrysostomos to Venizelos on September 7, 1922. This was to be his last communication. The Metropolitan felt that Greeks were about to experience a national catastrophe of unimaginable proportions. He criticised the former Greek Premier Eleftherios Venizelos for appointing Sterghiadis and staging the November 1920 election. Chrysostomos was also an ardent Venizelist.

“Hellenism in Asia Minor, the Greek State and the entire Greek Nation are descending now into Hell from which no power will be able to raise them up and save them. For this unimaginable it is of course your political and personal enemies who bear the blame; but you too bear a great weight of responsibility for two of your actions.

First because you sent to Asia Minor as High Commissioner an utterly deranged egotist. Secondly because before you had completed your work and put the crown and seal on the unimaginably fine and magnificent creation you had built up, the establishment of the foundation of the most glorious Byzantine Empire, you had the unfortunate and guilty inspiration to order elections on the very eve of your entry into Constantinople and the occupation of it by the Greek army in the implementation of the Treaty of Sevres–now alas–forever destroyed….”

Chrysostomos felt his final days were at hand. He continues:

“. . . . I have judged it necessary above all out of the flames of catastrophe in which the Greek people of Asia Minor are suffering–and it is a real question whether when Your Excellency reads this letter of mine we shall still be alive, destined as we are–who knows–for sacrifice and martyrdom by the inscrutable decrees of divine providence–to direct this last appeal to you.”

He hoped that Venizelos might establish a series of revolutionary movements to save Greece and the Greeks of Asia Minor and Thrace. He states:

“If in order to save Greece you judged it your duty to initiate the revolutionary movement of Salonika, do not hesitate now to initiate a hundred such movements in order to save the whole of Hellenism everywhere and especially that of Asia Minor and Thrace; which nourishes such a religious admiration for you.”

Chrysostomos finally wished that Venizelos could make a self-governing Greek State in Asia Minor a reality. He concludes:

“It is not necessary for this Hellenism and these territories with Constantinople to be united with Greece, because that dream has been removed from us for at least a hundred years, but hasten to raise your powerful voice, so that these territories may be made an autonomous Eastern Christian State, even under the sovereignty of the Sultan, with your noble self as High Commissioner.”

Before the arrival of the Turkish army into Smyrna on September 9, 1922 Chrysostomos attempted to persuade the foreign consuls to provide some protection for the Christians. The American Consul General George Horton states that Chrysostomos “was offered a refuge in the French Consulate and an escort by French Marines, but he refused, saying that it was his duty to remain with his flock.”

On September 9 Chrysostomos was asked by a Turkish policeman to accompany him to Government House to see Nurredin Pasha. Smith states “It is probable that Nurredin reproached Chrysostomos with his active encouragement of the Nationalist Greek cause, and support for the Asia Minor Defence League, calling these treason in view of Chrysostomos’s Turkish nationality.”

From the balcony Nurredin shouted to the crowd below to deal with the Archbishop in any manner they choose. He was manhandled and taken to a barbershop owned by a Levantine, where Chrysostomos was dressed in a white barber’s coat. The mob beat him, tore his beard, shot him and mutilated his body. On September 18 George Horton wrote from Athens to the US Secretary of State in Washington DC stating some interesting information on the death of Chrysostomos. Soon after his death this information was relayed to Admiral Dumensil of the French Navy who replied cynically “he got what was coming to him.”

Horton stated “I do not share this opinion. I have known Monsigneur Chrysostomos for years. He was an active and enthusiastic exponent of Greek ambitions and ideals which it seems to me was quite natural in him as a Greek.”

He paid the ultimate tribute to Chrysostomos by stating that the Greeks should “set him down in their history as a hero and martyr.”