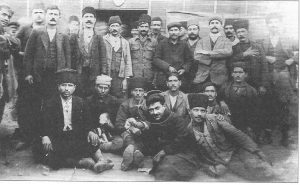 of 1914, before the start of World War I, the  Committee of Union and Progress (CUP) called for general mobilization. Most Christian men were sent to labor battalions in the Anatolian hinterland to build roads for the war effort. Within approximately two months, backbreaking work in the mountains and ravines, along with hunger, and exposure to severe weather conditions killed most who served in these “battalions of death.” Some survivors escaped to join Greeks in the mountains who had taken arms to protect themselves and their families.

During the relocations and the destruction of Greek villages in Pontos, the Greek man continued to serve their obligatory service in the Ottoman army under harsh conditions which became worse after 1917.

In 1920, the National Assembly in Ankara reinstituted the conscription to labor battalions for non-Muslims. Very few men were able to survive. One of the most famous survivor of these labor battalions was Elias Venezis born in Aivali, near Smyrna. He was imprisoned and then sent to labor battalions. Of the 3,000 men in his labor battalion, he was only one  of the 23 to survive (see photo from the book Chronicle of Ten Days by Agapi Molyviati-Venezi).

The following article was written by Professor Speros Vryonis, Jr. and published in the book Cultural and Ethical Legacies -The Armenian Genocide, edited by Professor Richard Hovannisian.

The Labor Battalions in the Ottoman Empire