The tragic and holiness of the last Emperor of Trebizond , David Komnenos By Dr. George Tsakalidis , Theologian – Thriskeiopaidagogou

The following article was published by Euxeinos Pontos newspaper, Thessaloniki on November 2013
Translation by Stavros Stavridis from Australia 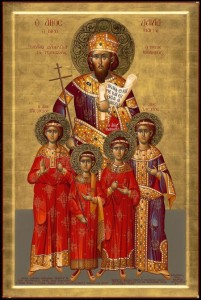 On November 1, 2013 for the first time our Church celebrated the memory of its youngest saint, David Grand Komnenos. His elevation to sainthood happened this year on July 10 with a special act of the Holy Synod of the Patriarchate of Constantinople, after the submission of a comprehensive dossier by the Metropolitan of Drama, The most Reverend Paul to the Holy Synod of the Church of Greece. In essence this is a very late elevation after 550 years. The reason for this delay is due to the fact that David himself had handed over Trabzon (Trebizond) to Muhammad II, the Conqueror, that was considered by many an act of national humiliation. This act literally sealed the fate of the last emperor. It is indeed tragic to surrender your country to a conqueror. Especially since eight years earlier, the blood-related Emperor of Constantinople fell defending the walls of the city as a common soldier together with others and was placed into the pantheon of heroes.

Must we judge his holiness purely with a national criteria? Was David actually a national under bidder or whether capitulation to the occupier could be considered an act of prudence; what possible room for maneuver was available for the last emperor? did he have the slightest prospect of success in resisting the conqueror?
It is a fact that the capitulation was not undertaken lightly but after he had exhausted all possibilities and considered all perspectives. Pope Pius 11, received a request addressed to him seeking his assistance and showed his abundant love to the Orthodox Pontus Greeks by sending a letter and a Franciscan monk named Louis to the monarchs of the West to try to get them to assist the endangered Pontians. The rulers unfortunately remained unmoved. The same Duke of Burgundy, Philip and Prince of Venice remained unmoved to David’s request for assistance. The allies, including Turkoman Ouzoun Chasan, who was married to David’s niece Catherine, Ishmael, the ruler of Sinope, and other minor leaders offered “land and water” to Muhammad. No help would be forthcoming. Constantinople was conquered eight years earlier and many of its inhabitants experienced merciless slaughter. The power of Muhammad was tenfold with his experienced infantry. Muhammad’s navy besieged Trebizond for a month and his army landed on the outskirts of the city which they plundered. There was no choice other than to open negotiations. The Crown Council convened. All were in favor of capitulation, which could prevent similar suffering of the people as what had befallen the inhabitants of Constantinople.

David was represented by his senior adviser George Amiroutzis. He was charged later that he betrayed David and persuaded him not to resist and capitulate . With a heavy heart the last emperor surrendered his capital, Trabzon to the Turkish conqueror to protect the people from extermination. One can only imagine how much grief stricken when he saw the church’s patron St. Eugene converted the very first Friday after the 15th of August 1461 into a Jeni Jami (Mosque). Indeed David was a tragic leader. Muhammad gave him an area near Strymona, boarded him and his family on a Turkish ship bound via Constantinople( Istanbul) for Edirne.

Two years later, however, Muhammad who feared the big name of the Komnenoi called him to Constantinople and accused him of conspiring against him and placed him in a dilemma situation: to either convert to Islam or be slaughtered along with his children and his nephew. Without the slightest hesitation he chose the second. “And he saw,” writes Panaretos Topalidis “his seven sons and nephew Alexios slaughtered and after them he was slaughtered on the hill opposite where Constantine Palaeologus had died fighting some twelve years ago.” Here lies the great holiness of the last emperor of Trebizond. He preferred that all his children and his nephew and successor Alexius be slaughtered like lambs rather than betraying his Orthodox faith. Muhammad gave an order to let the slaughtered children remain unhurried for three days so that the Greeks would be terrorized. David’s wife, Helen, as another Antigone, ignored the order of the Sultan, gathered at night time the dead bodies from the Marmara Sea where they were thrown by the butchers, she dug graves and buried with her hands the remains of her children, her nephew and her husband The sorrow for this great calamity sent her soon to her death.

These facts are cross referenced in reliable Greek, German and Bosnian sources. That’s why no one should give importance to the writings and reproduction of certain Greek encyclopedia, which distorted the historical truth. The German historian for e.g., Weisz in his book Weltgeschichte states that “Muhammad… asked David to choose between the Quran and death . This time David showed courage.” “No martyrdom going to bring me to the point to renounce the faith of my fathers’ he said. “Die then,” remarked the enraged Sultan, “and take with you to the death all of your sons, those who you inspired your own stubbornness.” On the same page notes: “David encouraged his seven sons to die bravely.” While Hammer in his book Geschichte des Osmanischen Reiches, equates David’s wife as Solomoni, the mother of the Maccabees.
The family sacrifice of David touched the Orthodox people of Bosnia, because there were family ties between Komnenoi and family of Serbian despot, Georgi Brankowits. There is a scientific historical treatise of Kamila Lutzername titled The Last Empire of Trebizond on the southern Slavic poetry, which includes an extensive epic poem, which shows the great emotion of the Serbian people for the agonizing end of last Komnenos family.

So when there is so much suffering which David endured with courage and fortitude remaining steadfast in the Orthodox faith, when so much blood is shed according to the teaching of the Church which “cleanses from all sin,” the small-mindedness and even the tragic moment of David’s surrender to Muhammad which nothing could have prevented it. The only thing that he could have achieved was the greater scale of massacres and extermination of his fellow citizens. Maybe we should apologize to the martyr because we delayed too long and unduly to rank him among the saints of our Church. Worthy of congratulations are the Metropolitan of Drama Paul who took the initiative and the two Synods of the Church of Greece that accepted and promoted the proposal and the Patriarchal Synod of Constantinople that placed among the saints of our Church David’s three sons: Basil, George, Manuel and his nephew Alexius.