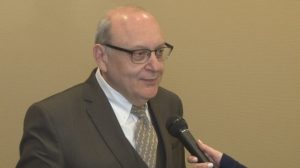 Chicago- On Sunday April 23, 2017, the Asia Minor and Pontos Hellenic Research center (AMPHRC) in collaboration with the National Hellenic Museum (ΝΗΜ) of Chicago celebrated the publication of the new book Genocide in the Ottoman Empire: Armenians, Assyrians, and Greeks, 1913-1923, at the National Hellenic Museum in Greektown, Chicago. The book consists of academic papers presented at the 2013 Academic Conference that the AMPHRC organized at the Holocaust Museum in Skokie. The conference was also supported by the Armenian and Assyrian societies of Chicago.

The event at the NHM featured a keynote presentation by the editor of the book and noted historian Mr. George Shirinian. Mr. Shirinian is the Executive Director of the Zoryan Institute, an international institute that studies the Armenian genocide— and a long standing friend and supporter of the Center. The book presentation was followed by questions from the audience, and discussion co-ordinated by Prof. Anastasia Giannakidou, University of Chicago, and Chair of the Academic Committee of the Center. The event closed with book signing by Mr. Shirinian and an open house at the AMPHRC—where dozens of visitors had the opportunity to see the center’s library and continue the conversations about the book and the mission of the Center. 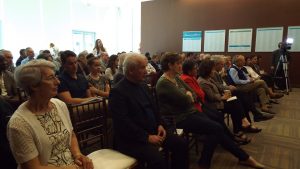 Genocide in the Ottoman Empire: Armenians, Assyrians, and Greeks, 1913-1923 breaks new ground in approaching the genocide of Armenians, Assyrians and Greeks as a single historical event. Mr Shirinian took pains to show that we gain much better understanding of what happened to Greeks, Armenians and Assyrians– before, during, and at the aftermath of WWI— if we study the events as ‘Ottoman genocides’, thus signalling the fact that there was a single orchestrated effort by Turkish regimes (Ottoman and Kemalist) to destroy all non-Muslim, Christian people in what is now the modern state of Turkey. The genocides of the three ethnic groups—Armenians, Assyrian, and Greeks—consisted in systematic violence against them, boycotts, deportations, and massacres. Mr. Shirinian began with a personal recollection of his upbringing as an Armenian in Canada.

In 2008, Mr. Shirinian participated at the first Academic Conference as a key note speaker to discuss the Armenian Genocide and the work of the Zoryan Institute. The conference was organized by the Pontian Greek Society of Chicago for examining and researching the “Great Catastrophe” of the Greeks of Eastern Thrace, Asia Minor and Pontos. That was the beginning of a collaboration which led to the establishing of the Asia Minor and Pontos Hellenic Research Center in 2011, several international conferences, and the publication of several books with original research and new information about the genocides. 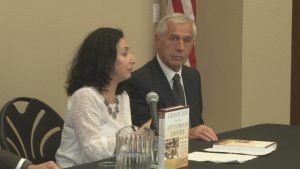 Mr. Shirinian emphasized that “We study our history with the vision to better understand ourselves, to help explain what our people have gone through to the rest of the world, and to be able to pass on our historical and cultural legacy to the next generation, so that they understand profoundly what it means to be Greek or Armenian.” He continued that it was not the Christianity of the ethnic groups alone that was the culprit for the genocides. It was also the tension between the Muslim ruling elite and the prosperous non-Muslims, which were better able to benefit from commerce with Europeans and technological and other economical advances of the time. Such tension is also found in the Nazi rhetoric against the Jews of Germany. Just like during the Nazi era, the non-Muslims of the Ottoman empire were the targets of envy, resentment, suspicion, hostility, and eventually, extreme violence. Nearly a century of reforms in the Ottoman empire in the 19th century leading up to the genocides failed, because the Muslim Turks, the “ruling nation,” were incapable of accepting non-Muslim, non-Turk fellow citizens as their equals.

Mr. Shirinian emphasized that the new book Genocide in the Ottoman Empire is the latest tangible effort towards advancing an integrated study of the three genocides. While the era is generally known for the Armenian Genocide, it was actually the Greeks of Eastern Thrace who were targeted for destruction first, beginning in 1912. In order to solidify Turkish claims to this territory during the Balkan Wars, the Ottoman government deported and expelled some 332,000 Greeks. This deportation was done without warning and in intentionally brutal ways. Approximately 15,690 Greeks were massacred in Eastern Thrace in 1912 and 1913, and about half the deportees to Central Anatolia perished. Meanwhile, Armenians, Assyrians and Greeks had been conscripted into the Ottoman army, but being distrusted, were disarmed and formed into labour battalions, where they were put to work under the harshest conditions, clearly designed to lead to their deaths. Eventually, all the Armenian soldiers were murdered outright, with similar fates for the Greeks and Assyrians. Mass killings, deportations, and exile applied, likewise, to all three ethnic groups. 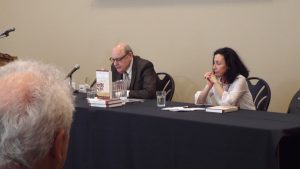 The fate of the three peoples was closely intertwined, and their experiences were nearly identical. Today, the continuing persecutions of Christian and other minority populations by the Islamic state in the middle east and Africa, and the massive human rights violations currently observed in those regions— that target, again, Christians— makes the study of the Ottoman genocides as contemporary and urgent as ever. By studying the first genocides of the 21st century in that region, we gain insight into the conditions that produce violence and draw lessons for public policy about how to prevent such tragic events from re-occurring.

Ultimately, the study of the Ottoman genocides is a step to restore historical memory, and defend human dignity. The AMPHRC is extremely pleased to have hosted this event with Mr. Shirinian, and is also grateful to have had the support of National Hellenic Museum— in particular the director of the Museum Dr. Laura Calamos, and the director of the museum’s Greek Language and Culture Program Mrs. Dimitra Georgousis who took the major task of organizing and advertising this successful event.