Exile and death in Samsun

The following are two excerpts from the book, “The Greek Pontians of the Black Sea”, by the late Constantine Hionides, M.D. Professor, Boston University School of Medicine, Published by Kyriakidis Brothers, Thessaloniki,Greece, pages 257 and 259.

The expulsion route maps are from “The Genocide of t he Greeks of Pontus” written by Professor Konstantine Fotiadis, Published by Herodotus, 3rd volume, pages 467-476.

Gavrielides, A.: Pages of the black national calamity of Pontos. Athens, 1924,

“The miraculous and rapid period of progress of Samsun was interrupted by the First World War.

“The Turks first turned against the Armenians, and later against the Greeks, with an amazing ferocity. In June 1915 all Armenians, of Samsun were sent to exile. All their property was confiscated. During the march towards the interior of Turkey, all the men were slaughtered. None survived!

“On December 27, 1916, 90 rich Greeks were arrested and sent into exile the next day. On New Year’s Day of 1917, 40 more community leaders were caught, and two days later, 300 more merchants and scientists. The places of exile were Amasya, Tsorum and Tokat.

“During the armistice of 1918, the Greek survivors returned to their homes and started reconstructing their stores and houses. In Samsun, the high commissioner Solter of Great Britain arrived with a military unit, along with the French representative Faveraux.

“On May 19,1919, Kemal set foot in the city of Samsun and began organizing his movement, which was directed against the Greeks.

“At midnight on January 22,1921, 72 Greek community leaders were arrested, sent to Amasya, and sentenced to death by the “Court of Independence” on September 21,1921. Then, they were hanged. 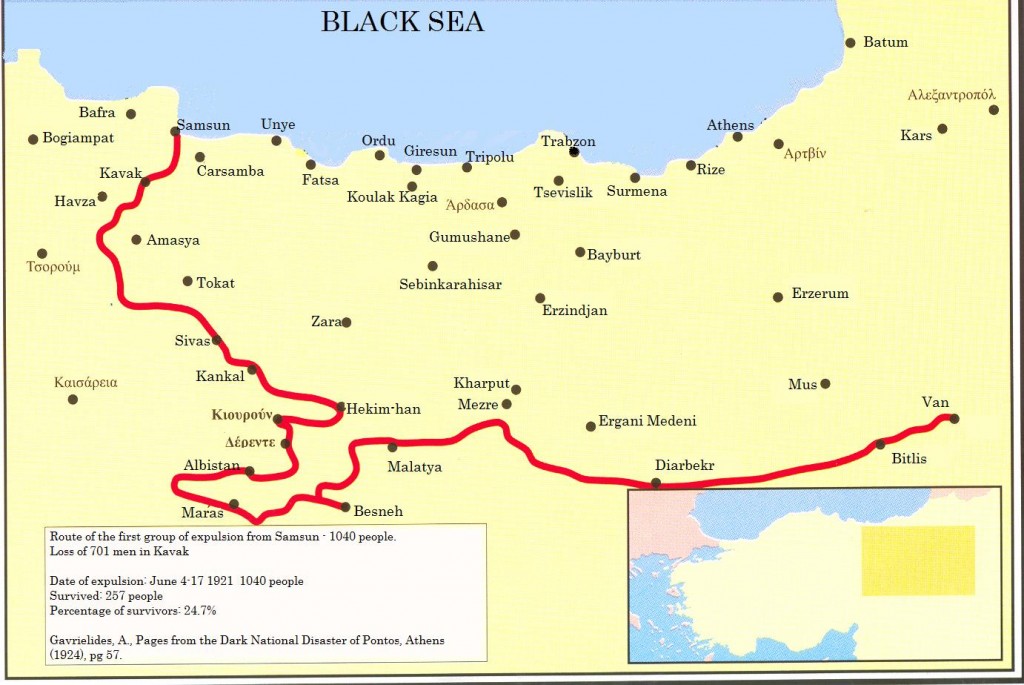 “One June 3, 1921, the city was surrounded and 1,400 men, 17 to 70 years old, and 280 young men were captured. The men were imprisoned. The young men were drafted into the army. Then, the scenes of exhausting missions to the interior, as well as the massacres, began.

“Second mission: Comprised of 257 drafted young men and 420 arrested men, a total of 677. They started out on June 5,1921. Luckier than the previous ones, they were not slaughtered. Whoever had survived, arrived at Kangal and Malatya.

“Third mission: 1085 men. They started out on June 7,1921. At Tsompus Han, 30 km. from Samsun, they were caught in a massive crossfire and 700 were killed. The 385 survivors continued their march. Half an hour further down the road, at Mahmur Dag, an additional 120 were shot to death. The remaining 265 continued on to Malatya.

“Fourth mission: On June 12,1921 of 580 men set out and arrived at Havza, 351 old men were sent to Amasya. The other 229 young men were sent to Tsorum. On the road, 397 more young men, from different provinces, were added. So, 626 young men continued to march. At Seitan Deresi (the devil’s valley), 4 hours from Sogurlu, they were all butchered.

“Fifth mission: 365 men. They set out on June 16, 1921. At Tokat, they were united with 101 more from Unye. In Sivas (Sebasteia) more from Kerasounta, Ordu and Fatsa were added, for a total of 1066 men. They walked, and whoever survived, arrived at Kangal. The men from Samsun and Unye were sent to Elbistan. The rest were sent to Malatya.

“Sixth mission: 262 men, 50 to 60 years old. They began their journey on August 11,1921 and most of them arrived at their destinations. Some went to Malatya, some to Harput, some to Diyarbakir.

“Seventh and eighth missions: 39 men and 450 women and children. Very few arrived at Malatya on September 15, 1921, after a dreadful journey. Most of the women and almost all the children had died from hunger and disease.

“Ninth mission: 206 men, mostly young men who, up until they were discovered, had been hiding in the city. They were sent out on September 17,1921, for Bitlis. On the road, 166 died, many from hunger and disease, most of them from freezing temperatures in the Deli Tas Mountain.

“So, in three months, 2,147 people, almost the whole male population of Samsun, found terrible deaths on their road to exile.

“After the Asia Minor disaster in 1922, the local authorities of Samsun forced the Greek population to leave Turkish soil. Most of them were women and children, who left in boats for Greece. Great waves of them left during the last months of 1922 and the first months of 1923. Few were left to deport later with the regular population exchange in 1924.

“The refugees of torture Samsun were relocated in the larger centers of the country Athens, Piraeus, Thessaloniki, but many at the tobacco producing areas of Drama and Kavala.