THE WHITE SLAUGHTER AT KOTYORA (ORDU)

“On August 11, 1917, the Greeks of Pontos were leaving on Russian warships. A total of about 3,500 of the Greeks of Kotyora found refuge at Trapezounta. About an equal number were left at Ordu to the discretion of the Turkish vengeance.

“The next day, August 12, 1917, the rumors in the market place indicated that whoever was left would be exiled. This was the beginning of the plan of the local Turks, masters of Ordu and Vehip Pasha, commander of the Turkish IV Army.

“On the 4th day, the order from the prefecture about the exile was announced. The next day, the Greek community sent a telegram to the Ecumenical Patriarchate, in Constantinople, asking for intervention with the Ministry of Interior to cancel the order. Another telegram was sent to the commander of the IV Army, Vehip Pasha. All were in vain. The deadline for the beginning of the exile was only 8 days away.

“The women and poor people started selling whatever they owned, clothing, furniture, utensils, anything they could get rid of. Their prices tended toward a “plate of lentils.” And the Turks were purchasing…

“Whole stores, fabric shops, grocery stores, and small family factories, with their appliances and tools, were sold at humiliating prices, 1/10 or even 1/20 of their value. The Greek property was transferred to the Turks. 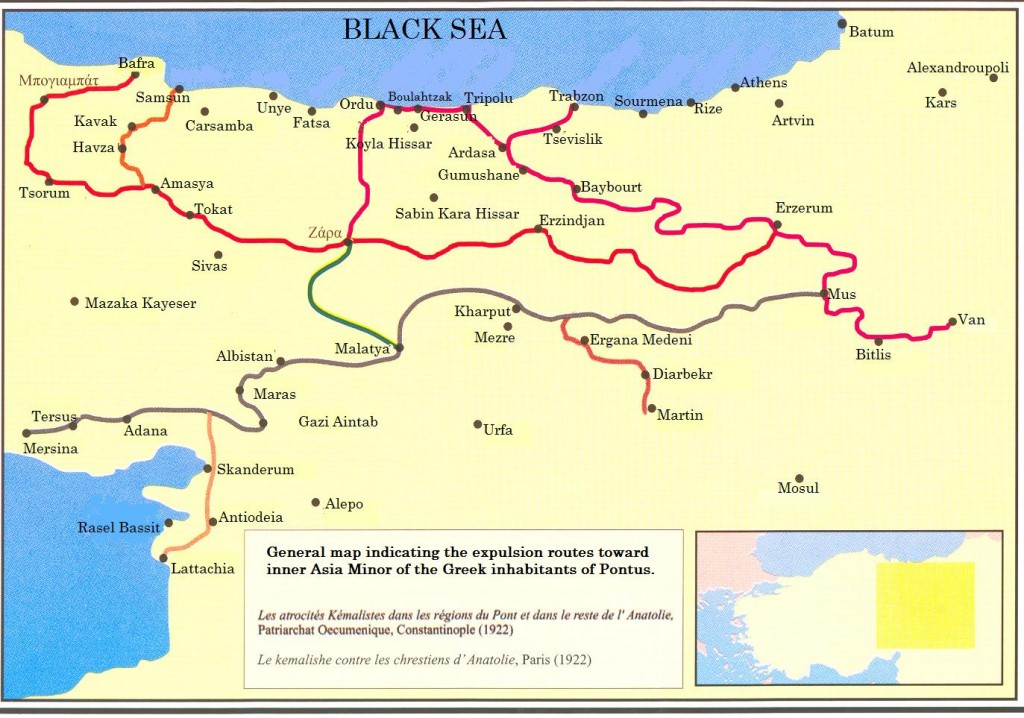 “The Greek population, more than 3,000, was divided into 7 groups according to an administrative plan. Every 2 to 3 days, a group would start out into exile.

“The sufferings of the people were innumerable, due to the continuous marching. On the road, nightly rest, then on the road, always on the road.

“The torture lasted 30 days for these people, carrying their mattresses and their small children. Most of them became sick from starvation and the rain. But they had to keep walking.

“Deaths were not rare during the march. The poor creatures dug temporary graves with shovels they carried with them and buried the dead, and off they went. But Erbaa was to become the burial ground of the majority of ill fated exiles. With the continuous walking, their health was tremendously weakened. The overcrowding in the town, the malnutrition and hunger in general, the incapacity to keep the principal rules of sanitation, brought typhus and dysentery. The disaster was serious. Forty per cent of the population was lost.

Copied from the book The Greek Pontians of the Black Sea by the late Constantine Hionides, M. D.