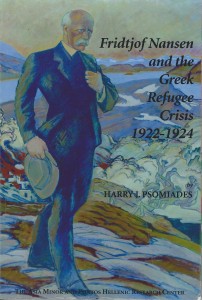 This is an impeccably written and carefully researched study by a promi­nent political scientist. Harry Psomiades focuses on a most critical period (1921-23) that has left a permanent mark on the fortunes of 20th century Greece and Turkey. Two powerful personalities dominate the narrative: Eleftherios Venizelos and Fridtjof Nansen. The former was a prominent statesman who modernized his country and managed through carefully crafted regional alliances and insightful decisions to double Greece’s territory during the Balkan Wars and World War I. The latter was a dashing Norwegian adventurer and explorer and Nobel Prize winner, who remains a central figure in international humanitarian work through his associations with the League of Nations and the International Red Cross.

This fascinating story, covering Greece’s defeat at the hands of Mustafa Kemal Ataturk’s Turkey during the 1921-22 Anatolian campaign, raises questions that are of central relevance to the present time: What is the role of international organizations and civil society in helping governments, following periods of tragic warfare, to control the damage and address the needs of civilians that are caught in the middle? Is a compulsory population exchange—based on religion or ethnicity—a painful but necessary instrument to support the peace after a war? Are we moving toward a United Europe that can sustain multiculturalism or is the “clash of civilizations” an inevitable element of the future? Is history the product of chance and a myriad of events or is it best explained by the decisions of wise statesmen or the omissions and actions of populist politicians? The reader of this fine volume will be helped to form some answers to these and many other difficult questions.