The Exodus project, by the Asia Minor and Pontos Hellenic Research Center (AMPHRC) 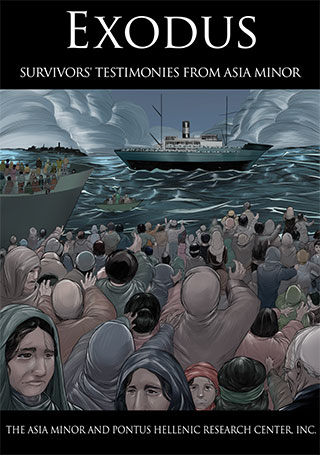 The Exodus project, by the Asia Minor and Pontos Hellenic Research Center (AMPHRC), is the translation, from Greek to English, of survivor testimonials from the Great Catastrophe. Originally published in Greek by the Center for Asia Minor Studies in Athens in 1980, Volumes A and B are testimonies from Asia Minor. Testimonies in Volumes C, D, and E are from Pontos.

The Exodus chronicles the harrowing and heart wrenching experiences of those who survived against all odds. These testimonials play a crucial role in understanding what occurred before, during and after the Great Catastrophe. The translation of the testimonies, from Greek to English, will greatly expand the knowledge of what happened to nearly a million Greeks who were murdered by the Ottoman Turks, between 1913 and 1923. We believe it is vitally important that the actual accounts of what happened, from the genocide survivors themselves, be shared with a wider audience, especially English-speaking audiences in the U.S. and around the world. Preventing future atrocities, in large part, depends upon raising awareness about the horrors of the past.

At AMPHRC we believe it is critically important to process, translate, edit, and publish these testimonies ahead of the Centennial of the Great Catastrophe and the Great Fire of Smyrna next year, 2022. We will soon be uploading to our website sample testimonies from Volumes A and B which cover Asia Minor. As we complete our project, we will continue adding more testimonies to our website, including those from Eastern and Western Pontos.
We appreciate your interest in this historically significant project.