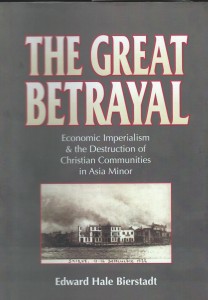 The Great Betrayal was first published in 1924. It exposes the rivalries and competing economic interests of the Allied Powers in the aftermath of World War I, how the Allied Powers failed to demand from Turkey the protection of its Christian minorities, and how they chose to negotiate economic treaties with her rather than hold her account­able for the destruction of its Christian communities.

Quotes from “The Great Betrayal”

“The nations want oil, because oil means money, and because it may well prove to be a decid­ing factor in another war. The minorities, the Armenians and the Ottoman Greeks, were either dead or in exile, desti­tute, naked and starving, and the public of America was straining every nerve for their relief- But, in the face of this, our representative at Lausanne was instructed to negotiate an economic treaty with Turkey. Our solemn promises to the Armenian people and to the Greek nation were set aside in favor of commercial relations.”

“At Lausanne the private economic interests of the great Powers, those interests which had or hoped to have some investment in Asia Minor, requested their governments to instruct the representatives at the Conference to see that they were fully protected.”

“The (Lausanne) treaty was signed in oil and sealed with the blood of Greeks and Arme­nians.”